Willemstad February 16, 2021 - Curaçao Airport Partners (CAP), is looking back with great satisfaction at the business that Air Cargo has brought to the airport community as a whole, to help withstand these uncertain times due to the pandemic.

Since the early beginning of the current Covid-19 crisis, Air Cargo began to take on an increasingly dominant role to support the survival of companies within the industry. When passenger traffic came to a virtual standstill, many airlines chose to design their passenger aircraft in such a way that they were made suitable for the transport of Air Cargo, and thus saved the survival of many airlines.

Even after passenger flights were cautiously allowed again, Air Cargo continues to play an important role, and this is also noticeable at the Curaçao International Airport.

Curaçao has always been known for the transport of so-called‘Belly-Cargo’ to Europe, or better said Air Cargo that was transported in the cargo areas of passenger flights. Mostly flowers that were supplied from Bogota (Colombia) and transported to Amsterdam mainly via KLM. Although there has been a decrease in recent years, since the current Covid-19 crises there has been a significant increase again, in which KLM currently has a leading role.

Mr. Walid-El-Hage, Managing Director of Swissport Curaçao, which company handles all these cargo flights, explained: “The latest wide bodies have more belly space than earlier-generation passenger aircraft. The B-777-300ER, A-330 and B-787 are responsible for the growth in belly freight capacity. The 777-300ER, currently often used by KLM on the Curaçao routes as a replacement of the B-747-400 can accommodate 28-30 tons of cargo in its belly, while the B-747-400 could only hold 16 tons. This ‘extra’ cargo currently can be the thin line between profit and loss.”

These days we do not only see the familiar cargo flights from Bogota, loaded with flowers for the Aalsmeer Flower Auction. We learned from Mr. Yendell Soerka, Regional Operations Manager, Caribbean & Suriname/TFTJ Americas, for KLM Cargo, that also new markets are explored such as Quito, Ecuador and Lima, Peru, whereby the products also have become more divers, like fruits from Colombia, in addition to the flowers, but also mangos, berries and asparagus from Lima.

These so-called feeder-flights are operated by South American companies with exotic names like: Líneas Aéreas Suramericanas (LAS Cargo), AerCaribe and Aerosucre. Based on the demand these airlines perform six to eight additional flights per week. Arriving in the morning hours, whereafter the aircrafts are unloaded, and the products are stored in the large cold stores at Swissport Cargo, where also the pallets with these products are repacked and remodeled by Swissport employees to fit the belly of the KLM-flights later that day.

These additional cargo flights are not only helping KLM, Swissport and CAP through these difficult times, but also help to ensure the job security for our local employees within these companies. 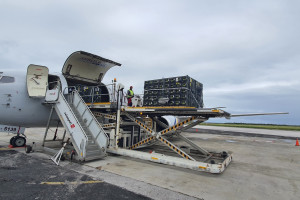 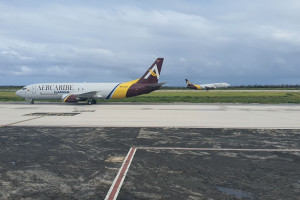 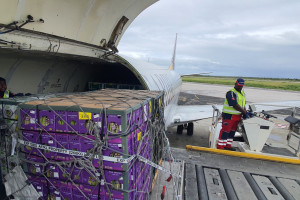